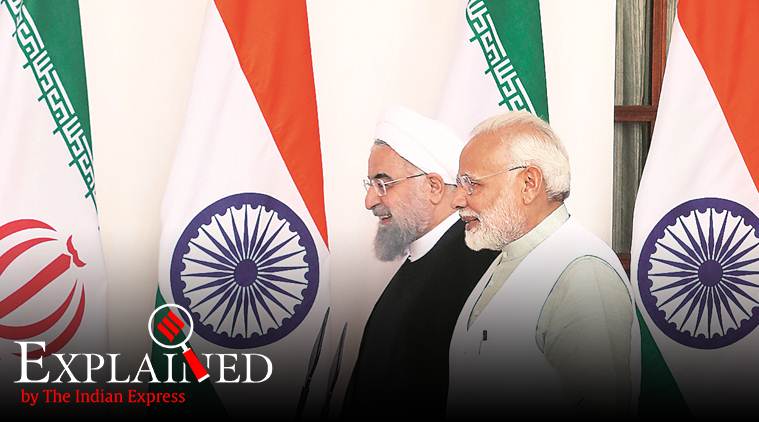 Iran has criticised India on the Delhi riots. It had also reacted to the 1992 Babri Masjid demolition and the 2002 riots, but its strong words now have caught notice. A look at the bilateral history and global context

LAST WEEK, Iran criticised India twice on the Delhi riots. On March 2, Iranian Foreign Minister Javad Zarif, highly respected in international diplomatic circles and known for his calibrated choice of words, tweeted about “the wave of organized violence against Indian Muslims” and urged India to “not let senseless thuggery prevail”.

The next day, India summoned the Iranian Ambassador in New Delhi, Ali Chegeni, and lodged a “strong protest”. Ministry of External Affairs spokesperson Raveesh Kumar said it was conveyed to the Ambassador that “selective and tendentious characterisation of recent events in Delhi are not acceptable”.

There has been no official response from the Indian government to this tweet. However, External Affairs Minister S Jaishankar said on Saturday, “We are getting to know who our friends really are.”

There were two other occasions — in 1992 and 2002 — when Iran’s response to events in India is worth recalling.

On December 7, 1992, the day after the Babri Masjid was demolished, the Iranian government summoned then Indian Ambassador Hamid Ansari, later India’s Vice President. The Iranian Foreign Ministry issued a démarche, made a public statement, and conveyed the concerns of Supreme Leader Khamenei to Ansari “behind closed doors”. Outside the Indian embassy in Tehran, there were protests including reports of stones being pelted, said Prof A K Pasha who teaches West Asia in JNU, although an Indian diplomat who had served in Tehran in 1992 didn’t corroborate this.

Tehran radio quoted Khamenei as saying the destruction of the mosque was “not just a local issue”. He said: “It is the duty of the Muslims of India not to tolerate such attitudes of the enemy.” Tehran radio said he asked Iranian Foreign Minister Ali Akbar Velayati to convey to New Delhi that Muslims around the world “expected the rights of Muslims in India to be respected”.

Hamid Ansari gave an interview to Iranian TV where he articulated the Indian government’s position that the “wrong will be corrected” and the “mosque will be rebuilt”, to which the Iranian side had “expressed satisfaction”, a former diplomat recalled.

Despite this, Prime Minister P V Narasimha Rao visited Iran in September 1993 — the first Indian PM to do so since the Islamic Revolution in 1979. In March 1994, Iran came to India’s rescue at the UN Human Rights Commission by blocking a consensus on Kashmir. But months later, Iran accused India of reneging on its promise to let a delegation of Organisation of Islamic Conference ambassadors into Kashmir.

In August 1994, Hassan Rouhani — then secretary of Iran’s Supreme National Security Council (effectively National Security Advisor) and deputy Speaker, and now President — visited India, and poured water on a year-long process of strengthening ties. He spoke of the treatment of minorities — some accounts say he talked about “persecution” — in the wake of the mosque demolition. He also recognised the importance of the Hurriyat Conference as “true representatives” of the people of Kashmir.

His comments were followed by the cancellation of a visit by Iran President Ali Akbar Hashmi Rafsanjani in October 1994. The official reason given was the Surat plague.

In less than a year, relations improved again, possibly prompted by the Pakistan ISI’s power play in Afghanistan, where Taliban became the dominant force. In April 1995, Rafsanjani finally arrived in New Delhi, welcomed by Prime Minister Rao himself at the airport. In the first visit by an Iranian head of state since the Islamic Revolution, Rafsanjani made amends for Rouhani’s comments. His address to the joint session of Parliament received an ovation, described as “unprecedented” by then MP and former Foreign Minister I K Gujral.

Rafsanjani gave an endorsement to India’s secularism at the Imambara in Lucknow. At his press conference in the capital, he put down a Pakistan journalist who raised questions about the Babri Masjid. He went ahead to praise India’s “serious will” on Kashmir while dismissing Pakistan’s call for American mediation. In his one-on-one talks with Rao, he was at pains to stress Iran’s virtual neutrality on the Kashmir issue, said one account.

The next test of the relationship came when the Gujarat riots took place during February-March 2002. The Iranian government conveyed its concerns to the Indian government, recalled Prof Pasha. Then Indian Ambassador, Paripuran Singh Haer, was the recipient of the message in Tehran. Old-timers, however, recalled that the message was “very, very subdued”. “This was the Mohd Khatami era, and they were very well-disposed towards India. While they did convey their concerns, they also told us that they do not wish to get into India’s internal affairs,” said an Indian diplomat who has served in Iran.

Khatami visited India as the Chief Guest at the Republic Day Parade in 2003, but did not once raise Gujarat with PM Atal Bihari Vajpayee. Khatami faced criticism back home.

What possibly sets apart Iran’s reaction now from that on previous occasions is the intensity of Khamenei’s words. Iran-watchers say that the tough language, that too after India had summoned the Iranian envoy, was Khamenei’s way of “underlining” the importance Iran attaches to the issue.

While Khamenei has spoken out about Indian Muslims on the said occasions, he has often raised the issue of Kashmir, most recently after the revocation of Kashmir’s special status in August last year. On August 21, Khamenei pinned his tweet: “We have good relations with India, but we expect the Indian government to adopt a just policy towards the noble people of Kashmir and prevent the oppression & bullying of Muslims in this region.”

Before that, Khamenei had raised Kashmir in 2017, and in July and November 2010, when he stressed raised the need for the Muslim community to support the “struggle” in Kashmir. This was in the backdrop of Iranian concerns over the Indo-US civil nuclear deal; in 2008 and 2009, India had voted against Iran in the International Atomic Energy Agency.

Iran has been upset over India’s decision to stop buying its oil, under threat of sanctions from the US. Between 2013 and 2014, amid sanctions, India imported only 11 million tonnes of crude from Iran. In 2018-2019, during sanctions relief, it bought almost 24 million tonnes.

It is important to note that China has become Iran’s biggest economic partner, and Beijing’s influence is visible in its foreign policy actions. While India strengthens its ties with the US, Iran knows that New Delhi needs Tehran for access to Afghanistan and Central Asia through the strategically-located Chabahar port. And while it has got a waiver for Chabahar, there is a view in New Delhi that Tehran may want India to intercede with the US for more India-specific waivers on the energy front.

Tehran is also aware of its importance in New Delhi’s calculus after the recent US-Taliban agreement, and that South Block needs Iran on its side as Taliban’s influence — and the Pakistan military’s influence — is on the rise in Afghanistan.

Iran is also positioning to play the leadership role in the Islamic world, with Saudi Arabia and the UAE perceived to be close to the US.

From a country that has sought to improve ties with India since the 1990s, Iran’s latest statements are a strong signal. The Delhi violence has clearly tainted the Indian government’s secular image in the Islamic world. After Prime Minister Narendra Modi’s efforts over five-and-half years to build relationships from Saudi Arabia to Iran, UAE to Indonesia, the remarks by Iran in particular and some other Muslim-majority countries will be seen as a weakening of India’s diplomatic clout.

South Block will have to work on relationships with all these countries, else risk losing its hard-earned diplomatic gains.