From Kerala, a robot to take care of coronavirus patients

Home  ›  INDIA  ›  From Kerala, a robot to take care of coronavirus patients 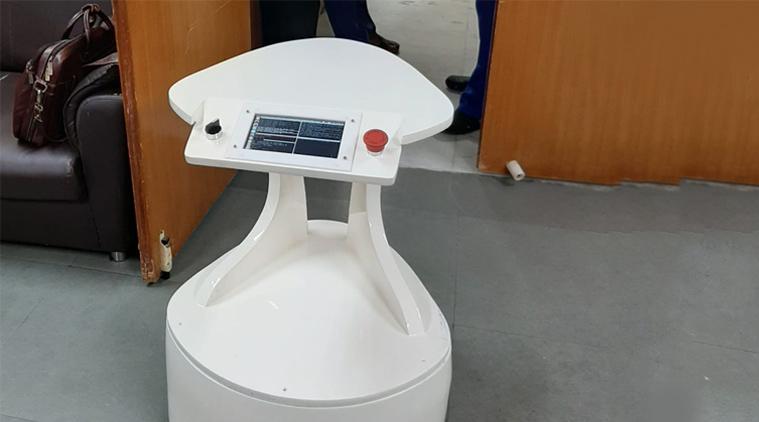 From Kerala, a robot to take care of coronavirus patients

The advantage of deploying a robot in this scenario is to cut down on human to human contact. This will help both health workers and visitors.

As the COVID-19 pandemic continues to spread in India and across the world, Kochi-based startup Asimov Robotics has developed a robot that can be deployed in hospitals to ease pressure on the medical staff. The three-wheeled robot can carry food, medical and clinical consumables and navigate freely in the hospitals. The robot has been developed in 15 days by a team of seven people.

“It is impractical to deploy human-like robots in hospitals. This is why we are working on a cost-effective model which is very practical at this point,” Jayakrishnan T, CEO of Asimov Robotics told indianexpress.com on phone.

Jayakrishnan said the robot is mainly designed to be used inside isolation wards. The robot, dubbed “KARMI-BOT”, has lower and upper trays that can be loaded with food or sterile containers. Additionally, the robot also disinfects the used items as it comes out of the quarantine zone. The robot also lets doctors or relatives interact with the patients through video calling.

Jayakrishnan said the robot has autonomous navigation and can be used remotely as well. The advantage of deploying a robot in this scenario is to cut down on human to human contact. This will help both health workers and visitors.

The robot is currently being tested internally and fine-tuned at the lab. “If spares are ready, we can make one robot per day with the current facility itself,” he said.

Jayakrishnan said the interest in the robot is increasing, even though the product has not been out yet. The company has been talking to clients in the US and the Middle East. However, Jayakrishnan is aware that to meet the demand, the firm needs to set up a production line and expand the facility which may take some lead time. For now, though the company wants to focus on the domestic market and its home state.

Jayakrishnan declined to reveal how much it costs to make the KARMI-BOT, but said it will be cheaper to produce than the existing robots. “ US clients are specifically interested in non-Chinese products, which is an advantage for us. Our ultimate aim is to load it with features and bring the cost below Chinese competitors,” he said.

Asimov Robotics, which is incubated within the Kerala Startup Mission, is one of the few high-tech robotics companies from India that focuses on healthcare.

In China, many hospitals have deployed high-tech robots to deliver food to patients, take patients’ temperatures, deliver medication and disinfect the facility. Similarly, the Spanish government is planning to test 80,000 patients a day using robots in a bid to fight the pandemic.

Earlier this month, Jayakrishnan and his team deployed two humanoid robots at the entrance of Maker Village at the Kinfra Hi-Tech Park in Kalamassery to create awareness about the coronavirus outbreak and distribute masks and sanitisers to people who work in the Integrated Startup Complex.

Jayakrishnan is also working on a realistic humanoid robot similar to Sophia. The robot, called Chhaya, is able to converse, understand and synthesise expressions.