‘Growth is important for jobs… If we reach 8-9%, automatically there’ll be employment creation’: Prachi Mishra 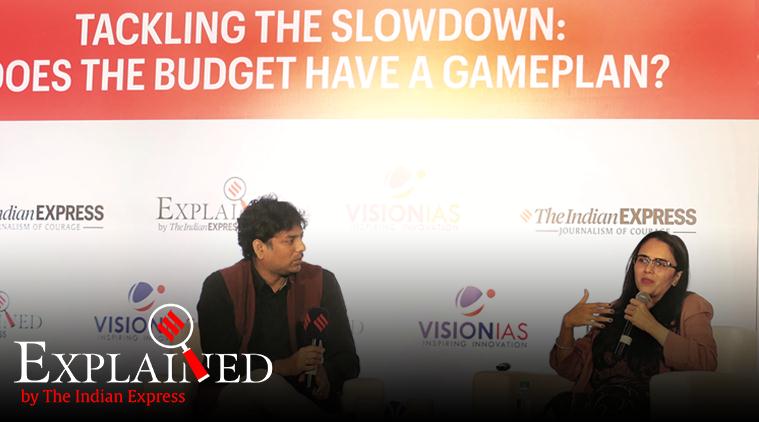 ‘Growth is important for jobs… If we reach 8-9%, automatically there’ll be employment creation’: Prachi Mishra

Speaking about RBI’s stance on inflation, Dr Prachi Mishra said, “Core inflation is about 30-40 per cent of the basket, which is low compared to other countries. But that’s a standard macroeconomic indicator of what stage of the cycle you are at”.

What is the nature of India’s current economic slowdown? How did it start, and where is it headed? What did the Union Budget do to address it? PRACHI MISHRA, Goldman Sachs Chief India Economist, explained these and related issues to readers of The Indian Express in the course of a conversation with the newspaper in New Delhi last month.

On Budget expectations of growth rate

Typically financial market participants ask three questions on the slowdown: when did it start, how big it is, and why did it happen. In our view, and looking at a host of indicators, this episode of slowdown started around January 2018, much before the NBFC crisis or the ILFS default. The ILFS default and the funding constraints etc. aggravated the slowdown. In our view, the slowdown is about 2-2.5 percentage points relative to the early 2018 phase — that’s the magnitude of the slowdown.

On how it happened — as I said, clearly funding constraints or what happened with the NBFCs was important, but it was definitely not the only cause and the trigger of the slowdown. What most of my research suggests is a combination of factors — global factors and domestic factors such as a sharp decline in consumer confidence and a negative central government fiscal impulse… If you look at the start of the slowdown, early 2018, and now, the central government spending to GDP, that went down and, in addition, there were funding constraints, which contributed to the slowdown. So I think a combination of factors…

And if the economy is growing slower, it trickles down. If the pie is smaller relative to what it would have been if the economy had grown at 8 per cent or 9 per cent, no matter how it is distributed, it does affect our lives.

On the growth outlook going forward

I have to say that I am relatively positive, and I say this because of five reasons, but I also highlight what the risks are.

Number one, our forecast is that generally, the global economy should do moderately better in 2020 and 2021 than in 2019. Of course it has got watered down a bit following the global novel coronavirus outbreak, but even then… and this is a positive for the Indian economy.

Number two, domestic financial conditions: this is a simple weighted average of short term interest rates, long term interest rates, equity prices, and exchange rates. That has eased by about 100 basis points since January 2018. That should feed into growth going forward. The risk to this view is what is happening in the shadow banking sector, or the non-bank financial sector, in general.

Number four, I think the government has taken a series of measures to address the slowdown, so you have to build some effect of those in the forecasts.

And finally, number five, I think there are some early signs of recovery… There’s a slight uptick in the India current activity indicator. Generally the data are still weak but improving sequentially. It is still early to say but there are some signs of economic stabilisation, but we have to watch it for some more time.

On the RBI’s stance on inflation

Core inflation is about 30-40 per cent of the basket, which is low compared to other countries. But that’s a standard macroeconomic indicator of what stage of the cycle you are at. And that has been increasing, which is a sign of some pick-up as well… Of course,inflation going up and some comfort on growth as well, might restrict the RBI going forward. I think our published forecast is that they are going to be on hold, unless there is a renewed bout of weakness in economic activity or, you know, inflation. We do think that this recent spike in inflation should peak in the first quarter of 2020 and then begin to come down. Our next month’s (March) forecast is lower than what we had this month… So it should peak, and then come down. But clearly, if inflation turns out to be higher than what we are expecting, or there is a renewed bout of weakness in economic activity, I think the chances of further accommodation by the central bank does increase.

On whether the government could have intervened to arrest the slowdown

About two years ago, we had built three scenarios around economic growth. One was the status quo, one was a regression scenario, and the third was an accelerated reform scenario. Right now, I think we are more in a regression… for FY20, a reasonable [growth] estimate would be around 5 [per cent], and for FY21, we are forecasting that we are going to move from a regression to a status quo scenario.

The accelerated reform scenario that we had built basically had four pillars: land, labour, privatisation, and export promotion. I think there has been some progress on each, but not to the extent that can take us to the accelerated reform scenario that we had envisioned two years ago… This is not only about this slowdown, it’s about the longer term slowdown… compared to say, the average of 2004-2011 and 2012-18.

On privatisation… in the broader sense, in areas like agriculture, banking etc, we’ve not seen much of it even being initiated. The second, in the narrower sense, was envisaged in the Budget… In FY20, the budgeted target for privatisation was 0.5 per cent of GDP, they ended up at 0.3 per cent, and for FY21 there is an ambitious target of increasing 0.3 per cent of GDP to 0.9 per cent, and clearly what the markets are looking for is a more credible plan, concrete timelines, specific steps on how this would go ahead. On why it didn’t happen, I think it definitely depends on market sentiment — it’s a combination of everything, which might explain why it did not happen…, but I think more important is, let’s look forward and see how it can be. Basically, market participants are saying, how do we expect that you are going to do 0.9 per cent of GDP? I think that it can happen (if) even one big privatisation happens… I think that can change market sentiment and that can have a positive effect other privatisations planned in the future.

Measuring economic activity in any country, especially in a country with a large services sector and a large informal economy, is very challenging. In one of our reports, we had compared India with some of the other economies for similarities and differences in terms of data collection. India is quite similar, if you look at measurement of GDP, to several other economies in terms of the base year, including informal sector activity, but India does stand out as an outlier in a number of other aspects, which includes high frequency of revisions [of data]. We have six or seven revisions in GDP before the final number comes out; in most other countries, it is one or two or three. India is also an outlier in not having actual data collection in a quarterly series. A lot of our GDP estimation is based on not even quarterly or annual surveys, but quinquennial surveys… in fact, estimates of the informal economy, which is half our GDP, is probably based on a 2010-11 survey. My hope is that the new committee that has been set up will look into some of these issues, but my broader point is that it has to be a statistical discourse, rather than a political one.

On the jobs outlook in the coming years

Though not much, there are some nascent signs of revival in private investment. The broader question is, given that ‘x’ number of people are being added to the labour force every year, given that we are a young population and dependency ratios are declining, are we really up for seizing the demographic dividend?

I would think that growth picking up is important for more jobs to be created. I think, growth, if we can actually go to the accelerated reform scenario with 8-9 per cent growth, then automatically, there will be employment creation for seizing the demographic dividend. At this point, I would think that raising growth using all the structural reforms as well as macroeconomic policies is essential for creating employment, which India needs.

Let’s first ask ourselves what was there in the Budget? I think if you look at the numbers, there is a growth trigger in the Budget. Our calculations suggest that there is at least a 1 percentage point fiscal impulse, or a moderate fiscal impulse, in the Budget… There is about 20 per cent increase in spending on some of the key outlays; rural infrastructure has picked up… What more could have been there? It’s a good question, but you know, the Budget is not that important an event across the globe… I think reforms have to be a continuous process and on all the aspects that we have discussed, one of the key downside risks to my growth outlook picking up to even 6 per cent, is the domestic financial sector…

Lending by shadow banks has declined dramatically. It was growing at 23-24 per cent, and now we are growing at 3-4 per cent. There are three reasons: if there is a slowdown in the economy, fewer people are asking for loans; second, the central bank has said that you have to have regulatory restrictions which are in line with tighter regulation for non-banks as well; and third, the biggest downside risk to my growth outlook, is a lot of risk aversion and lack of confidence in the domestic financial sector. Whether through the Budget or through the central bank’s measures, this needs to be broken in order to get the economy on track.

NBFCs are intricately linked to the real estate sector, and in the last monetary statement there were some specific measures… for lending to the MSMEs and some other sectors. Then there were other measures like some regulatory forbearance for lending to real estate. I think at this point what is important is to also guard on the risks. The problems that we had three-four years ago when bank balance sheets were stressed — then the asset quality review etc started; we want to make sure at this point that we guard on the risks, which might be building in the non-bank balance sheets…

On government’s response to slowdown

I think all of us were late to recognise the slowdown. I think, if you look at our data, it started in January 2018. I think the RBI actually increased interest rates in June and August, 2018. I think once the slowdown has been recognised, clearly there have been a series of measures taken by both the central bank and the government. Whether the word slowdown is in the Budget or not, I think, that’s less relevant. I think the challenge is that all these measures are going to take some time to have an effect…

Because, I think monetary transmission takes time to happen. What I am building in the forecast going forward is the effect of some of the measures, which have been taken. These are all facts, and there is so much of discussion and so much of data on the slowdown, that the question of denial [of the slowdown] does not arise, because it is well established, everyone is talking about it… I think a series of measures have been taken, but it’s still going to take time for the economy to revive, because all of these measures would take some time to manifest themselves.