Is Student Politics In India A Waste Of Time?

Home  ›  opinion  ›  Is Student Politics In India A Waste Of Time? 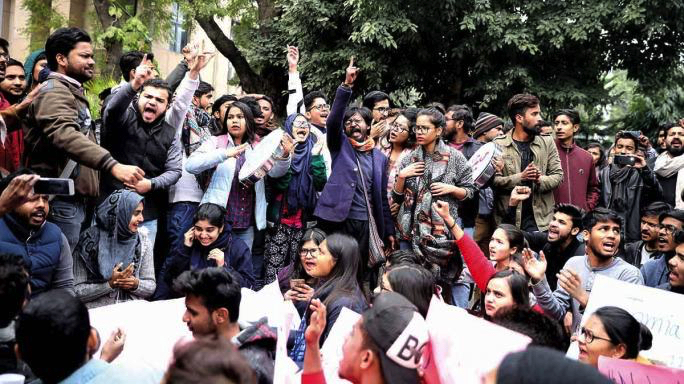 Is Student Politics In India A Waste Of Time?

A slogan in the student movement shaking many parts of India today is ‘Don’t be Silent, Don’t be Violent’. This slogan is good politics. Students are learning about good politics (debate, discussion, tolerance and democracy), the politics of neutrality (look the other way) and bad politics (use of force, sycophancy, hatred of others, exclusiveness). They can make a choice.

Student politics had a niche during the Indian independence movement against the British. Institutions like Allahabad University, Aligarh Muslim University, Banaras Hindu University and others became invigorated by the freedom struggle. In 1942, when the Quit India movement was launched, university students, who joined the struggle, were jailed and punished.

This tendency intensified and widened in independent India. A number of political leaders were born based on their experiences in student politics, including jail terms. Clearly, student politics is part of ‘learning democracy’, asking questions to the establishment and speaking truth to power.

The process of politicization of Indian students could not be contained from the 1960s onwards as many universities and colleges began to be radicalized. Many students joined movements across the right, left and centre. Senior leaders tried to get student leaders from the universities into positions in the political landscape.

In the 1960s and ’70s, colleges and universities worldwide widened the horizon of the most acutely aware students and their teachers (for example, the anti-Vietnam War movement). Of course, there were different gradations in different universities, but through the 1980s, the political conversations and contradictions in the universities became more sophisticated and subtle. Discussions ranged from poverty, development to gender and more.

However, some politics became increasingly based on the interests of political parties. For example, Emergency was imposed in India between 1975 to 1977, with curbs on civil and political rights, on freedom of expression and mass jail sentences. This led to a sharp reaction. In Delhi University, then student union leader, the late Arun Jaitley, was jailed. This catapulted him into deeper national politics. In Jawaharlal Nehru University (JNU), three student leaders were arrested during the Emergency, and many were incarcerated and suspended. They had all responded to politics.

Political parties often do not realize the need for training, learning and developing an organic relationship with student movements. Senior students are fully aware that major political leaders are themselves a product of the university system in many parts of the world. With increased and new communication facilities, better books and journals that deal with challenges facing the student community, the Indian landscape has been dramatically changed and student politics will become increasingly consummate and widespread, as well as more complex. This should be seen as a learning process—essential for any democratic culture.

Students attend colleges and universities at an age where their minds open up to new ideas, theories, opinions and debates from local to national and global. They learn to respond to politics and policies, as these shape life around them. These policies impact everyday life—from rights or gender, to the environment, and so on. They have to learn to make choices. Moreover, as the rallying slogan of the women’s movement, that has come so far, said: “The personal is political.” As a poster in JNU, where I studied, proclaimed: ‘When politics determines your future, you should determine politics’. Students have understood that politics matters.

Kamal Mitra Chenoy was a professor and chairperson of the Centre for Comparative Politics, JNU for almost 30 years. He has been associated with activism and public life.